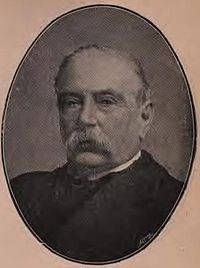 Barry was born in 1825 in Orpington Kent. He left school at 16 and went to Spain to work in business in Bilbao. By 1846 he had become vice-consul for the Biscaya province, and during the 1850s he made a fortune from a Portuguese copper mine. He was ennobled as Baron de Barry in 1837 by the King of Portugal.

In 1872 he purchased the country estate St Leonard’s Hill, and got involved with philanthropic projects in Windsor. During the 1880s he financed the building and fitting out of new consulting rooms and a children’s ward at the Infirmary on Victoria Street, as well as an isolation ward with nurses rooms. He became president of the Hospital in 1888.

Outside of Windsor he financed the excavation of Nybster Broch, an Iron Age drystone structure in Scotland, where he had bought Keiss Castle.  (See collection link below)

He died in his Windsor home in 1907 aged 82. Barry Avenue is named after him.

Catalogue of Material held in the National Monuments Record of Scotland

View all posts by WLHG

This site uses Akismet to reduce spam. Learn how your comment data is processed.